They write about us in the media

Mentions of our company and the Retailys system regularly appear in Czech and foreign newspapers and online magazines. We publish our knowledge, interviews and comments where we are referenced… If you want to read something about us, here is a list of some of the media stories.

Petr Heller, CEO & Founder of the Retailys company, made an appearance at the Czech and International E15 Summit Day, and moderated the entire Omnichannel block, where companies such as SAP, Dr.Max, Notino, Etnetera Sense and Asctum Digital spoke. On Czech day, Petr Heller spoke on the topic of Omnichannels and how to manage 10 E-shops across Europe.

Petr Heller was hosted by Jiří Rostecký, and discussed where Czech companies are lacking in confidence, why are they lagging behind foreign companies and what they unnecessarily underestimate. They even touched on the subject of the history of business in the Czech Republic and tried to predict what local businesses can expect in the future.

Expanding your e-shop abroad was never this easy

Did you know that in the Czech Republic we can find almost 45,000 E-shops? Many of which are beginning to expand internationally. The Retailys system helps them with this task – the first Czech so-called E-commerce omnichannel system, that is designed for the operation of international E-shops and sales on global marketplaces, such as Amazon or eBay. We talked about international expansion and our experiences from Europe and Asia with the founder of the Retailys.com s.r.o. company, Ing. Petr Heller. 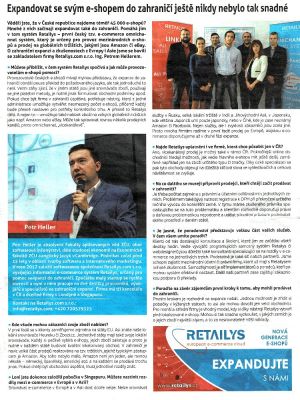 Petr Heller is a founder of the start-up Retailys.com. The project manages an unlimited number of E-shops in different languages from a single administration thus helping companies better expand abroad. Petr participated in the CzechAccelerator program in Singapore. Now he has two foreign branch offices. How did he manage to start his business? Listen to the podcast Na vlně podnikání.

Founder of Retailys: Classic E-shops enter the next evolutionary phase

Classic E-shops are approaching their next evolutionary phases. Everything points to classic small retail shops and E-commerce converging and we will no longer differentiate between Brick-and-mortar shops and electronic stores. Instead, we will talk about traditional and digital companies. Petr Heller, the founder of Retailys, which developed a tool for multichannel online sales, said this in an interview for Roklen24.

They wrote about us… 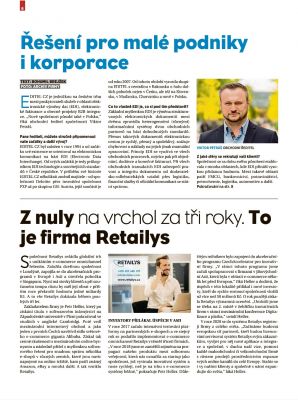 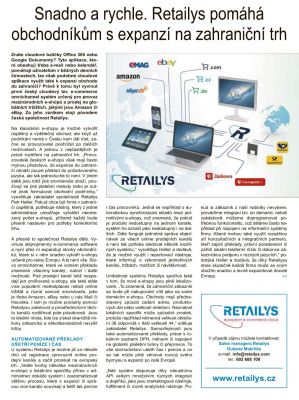 Expansion of E-shops abroad can be extremely complicated. Help comes with the omnichannel solution

When an e-shopper, manufacturer or some other business person decides to step out of their comfort zone and cross the borders of local markets, many challenges await them. Expansion into Europe is considerably complex, because this continent is not homogenous, many different nations and cultures are located here and every market has different customs thus even European E-commerce is quite fragmented.

With Retailys, international expansion is no longer just for the chosen ones

Increase your e-shop’s sales and diversify your income across Europe. Expansion abroad is a common trend that is making its way over to us.

Forty million for the star of E-commerce. Rostock-Poplar invests in Retailys

In the rapidly growing sector of E-commerce, a familiar name in the Czech business is hopping in. Michael Rostock-Poplar and a group of other investors are sending a total of forty million Czech crowns to Czech startup Retailys. They are developing a platform for E-commerce that will allow the customer to easily expand internationally.

People desire shopping over the internet more and more, Czech E-commerce is growing fast and the pandemic year has sent it into a total turnover of almost 200 billion Czech crowns. Currently there are already more than 40 thousand E-shops, which is one of the highest numbers of E-shops per capita in Europe and due to the strong competition, merchants often try to break into foreign markets. In this endeavor, the local company Retailys is there to help, they just announced the end of the investment round.

Czech startup Retailys succeeded in Asia. Now they help other companies with their expansion.

Founder of the startup Retailys.com Petr Heller invented an online platform that will help businesses sell in global markets around the world. After a three-month acceleration program with CzechInvest, the company has opened a branch office in Singapore. Now they facilitate expansions of other businesses and represents the Czech Republic in government missions all around the world.

Retailys became a digital company of the year 2019

During the recent months the company Retailys.com took part in various projects aimed at digitalization and introducing innovations into companies. They regularly host themed lectures on how to use the potential of online environments and at the same time teach sales people how to work with these online tools. Retailys was awarded a number of awards in several prestigious competitions for this work.

Digital company of the year announced for the first time

The Association of Small and Medium-Sized Enterprises and Entrepreneurs in the Czech Republic announced a competition called Digital Company of the Year as part of the Year of Digital Business 2019. The public chose their favorite competitors in 5 categories. The winners were announced at the largest AMSP ČR event of the year – a gala evening of the Day of Entrepreneurs of the Czech Republic at the Ambassador Hotel in Prague.

Businesses have been awarded for their innovations

In the conference Businessman and Payment, the minister of industry and business Karel Havlíček awarded companies that contributed to the digitalization of business the most. In the category of Small and medium-sized company, the first place was taken by a modern restaurant called Červený Jelen … the second place was given to the creators of cloud E-commerce tool Retailys company. Third place was taken by the company Makro Cash & Carry ČR.

JsmeSoucastiCeska.cz, 9/21/2019, online version of the article

In Columbia, Czech companies want to continue with their success from Peru

Interest in the business mission that accompanie the Deputy Prime Minister Richard Brace to Peru and Columbia continues in the latter country, where the delegation has moved. In addition to the Czech business delegation, about 200 representatives of Bolivian companies and organizations also attended. Retailys s there to help the expansion into Europe of various Peru small and medium-sized businesses.

The Asian continent belongs to startups. Especially its southeastern part. The area offers not only emerging markets with 650 million inhabitants, but also investment in innovation and support for research centers. One of the participants in the acceleration projects was Petr Heller with the Retailys project, which managed to secure an eight million investment.

Retailys is starting to break through into Latin America after Asia

The Czech technological e-commerce company Retailys took the first steps towards business activities in Latin America when it was selected as the only domestic IT company to be included in a delegation, including Deputy Prime Minister Richard Brabec, President of the Confederation of Industry and Transport Jaroslav Hanák and a number of major Czech companies, to present their solutions in Peru and Colombia.

Twenty companies focused on IT technology, robotics, artificial intelligence and automotives will go on a business mission to Magdeburg on Monday, April 1, 2019. They will meet representatives of almost 40 local companies and will also be able to find business contacts at the World Trade Fair in Hanover.

Regional Chamber of Commerce of the Moravian-Silesian Region 4/1/2019, online version of the article

In June and July, Southeast Asia will be the venue for major events at Innovfest Unbound Singapore (June 27-28, 2019) and RISE Hong Kong (July 8-11, 2019). Representatives of technology companies and start-ups from all over the world will visit the eventv. Czech start-ups can meet local business partners and potential investors, prepare the ground for expansion or just check your business plan and gain inspiration during a week-long stay in Singapore organized by CzechInvest together with the local business accelerator Expara.

Retailys.com represented Czech startups on their mission of Czech businesses in Asia

On 13-19. On January 1, 2019, Petr Heller, CEO of Retailys.com, was a member of a business delegation accompanying Prime Minister Andrej Babiš and Minister of Industry and Trade Marta Nováková on their journey through several countries in South and Southeast Asia. Retailys.com was the only Czech startup that participated in the delegation. And during the mission, Petr had the opportunity to present his e-commerce solution in Singapore, Thailand and India.

czechstartups.org, 1/24/2019, oonline version of the article

From 26 to 30 November 2018, a delegation of Czech companies and institutions prepared within the project to support economic interests (PROPED) visiting in cooperation with the Association of Small and Medium-Sized Enterprises and Self-Employed Persons (ASMSP CR), the Ministry of Industry and Trade of the Czech Republic and offices, CzechTrade in Bangalore, Indian state of Karnataka. In the capital Bangalore and Mysuru, it held a series of meetings with professional associations, local entrepreneurs, government representatives and government institutions, as well as Indian consulting and development companies.

Asian experience of 4 Czech startups: Why go there and how to assert yourself

The Czech Republic is a small market from a global point of view, which is why domestic startups are also trying to break through abroad. In contrast to European and American markets, the Asian markets stand out not only from cultural but also from business customs. In Tyinternety, we looked at what business looks like, why go there and what are the real experiences of Czech startups.

When the Czech E-shop is small, Retailys comes in

With the help of Retailys, any small or medium-sized company can sell its products worldwide. The Czech startup, which has developed a tool for multi-channel online sales, is expanding after returning from the acceleration program in Singapore.

Look at the TOP10 seed startups from The Czech Republic

Here are 10 innovative companies from the Czech startup scene who were selected to participate in the Seedstars Czech 3rd edition competition for the opportunity to represent the country at the Seedstars CEE Summit and the global Seedstars Summit ve Švýcarsku.

The Czech technological start-up Retailys.com successfully completed the first round of financing and withdrew 8.75 million Czech crowns from investors through the issue of convertible bonds.

Accompanied by CzechInvest, 4 Czech start-ups set off on unbound London

A simple application for small businesses Lumeer, IoT kit for creating your own electronic devices such as a motion detector or thermostat called BigClown, the already known system for global operation of e-shops Retailys.com and an application for travelers to rent travel and sports equipment, The Joystree. These are the products of four Czech start-ups, which, thanks to the CzechDvest project of the CzechInvest agency, will be presented to the international start-up community at the unbound London conference, which will take place on July 18 and 19, 2018.

The Czech e-commerce startup Retailys raised over a million crowns a day on Fundlift.cz

Retailys.com opens a branch in Singapore

At the end of April 2018, the Czech start-up Retailys.com established a subsidiary Retailys.com Pte. Ltd. After London, this is the company’s second foreign branch. Retailys.com started its activities in the second half of 2017 and is also a recent graduate of the CzechAccelerator project of the CzechInvest agency.

Klatovy startup is going to expand its business to Singapore

Not only can Czech startups gain valuable experience for the development of their businesses in Silicon Valley and New York. They will also find support for the development of their business in the Far East, specifically in Singapore, where Petr Heller from Retailys, based in Klatovy in West Bohemia, is going. He will get to this destination thanks to the CzechAccelerator program of the CzechInvest agency.

Experience Retailys platform and features it can offer. You can create your own e-shop with up to 10 products and with up to 10 orders. Try and see how easy it is with Retailys.
Try it for free
Manage Cookies Agreement
We use cookies to optimize our website. View policy
Manage options Manage services Manage vendors Read more about these purposes
Show preferences
{title} {title} {title}